Why Do Dogs Pee On Car Tires?

Dogs are full of behaviors that seem weird to us humans. However, most of these behaviors do have some logic behind them. Dog logic.

One weird habit many owners have observed in their dogs, especially in male dogs, is peeing on car tires. Why do dogs do this? 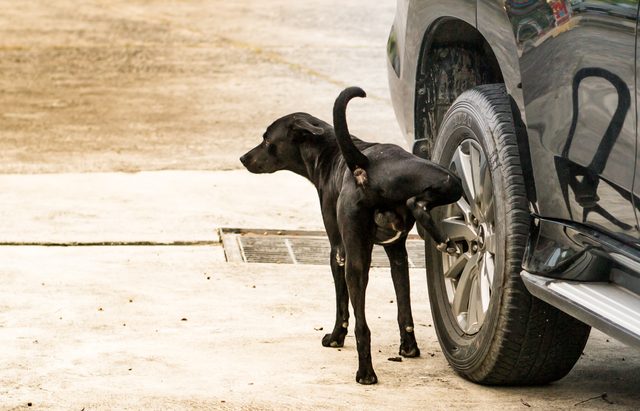 Do all dogs pee on car tires?

Not all male dogs lift their leg to pee, but the ones that do usually begin doing so once they reach sexual maturity, between 6 and 9 months of age. Peeing serves multiple important purposes for dogs, and elimination is just one of them. Dog urine contains communicative hormones. When your dog pees, it's kind of like a calling card to other dogs — "I was here."

WOOF: Why Do Dogs Chase Cars?

Peeing also serves to mark their territory, letting other dogs know, among other things, the last dog who marked a given spot.

Many dogs pee on vertical objects.

For these reasons, many dogs like to pee on vertical objects, like fire hydrants, telephone poles, and, yes, car tires. In her book Canine Behavior: Insights and Answers, author Bonnie V. Beaver explains that male dogs direct their urine at vertical targets 97.6 percent of the time. This behavior is likely because they want to leave their "business card" at nose level, so that it's in the prime position to be smelled by other dogs. 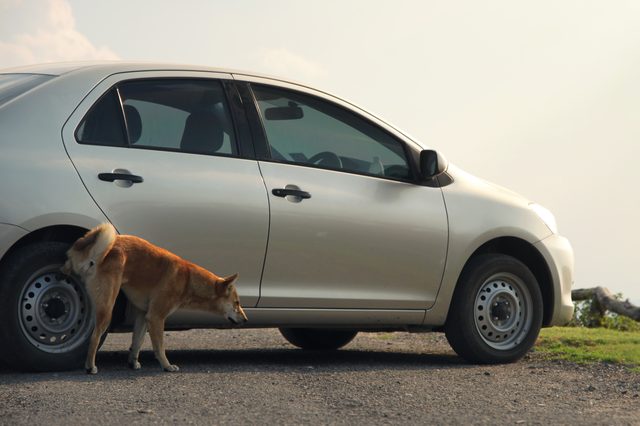 A Smorgasbord of Smells

Car tires are also a wealth of smells, making them a desirable urine depository for dogs. Imagine all the disgusting, enticing smells your tires have rolled through: animal feces, food, general garbage, possibly even roadkill. If you've ever owned (or been near) a dog, you probably know that they love smelly things, especially for peeing purposes, and tires are nothing if not covered in smells.

MORE: How Do Dogs Decide Where To Pee?

In addition, there's some evidence that the scent of urine tends to linger longer on vertical objects than on horizontal ones, as veterinarian and author Bruce Fogle explains in his book Know Your Dog. We don't know why this is, but it offers a benefit to dogs, who would prefer that their scent remain for other dogs as long as possible.

Finally, as with anything else: if one dog has peed on it, other dogs are going to follow suit.

How to stop dogs from peeing on car tires. 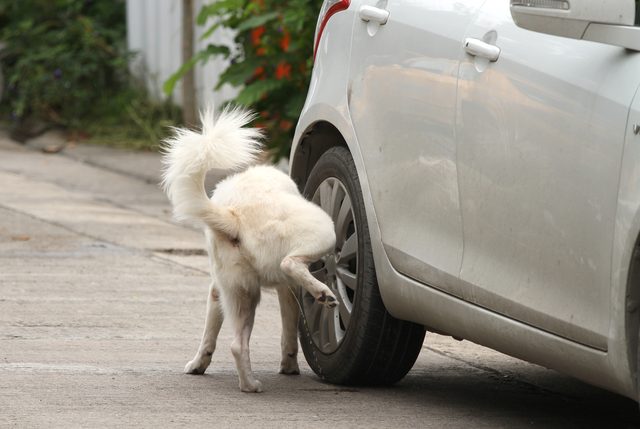 For most people, having a dog who occasionally pees on tires isn't the worst thing in the world. However, it can become a problem if they slow down to pee on every car, or if you have a neighbor who's especially picky about their beloved tires.

A house-trained dog knows that peeing outdoors is okay and peeing indoors is not. It can be challenging to set limits on where he's allowed to pee outdoors, but it's not impossible.

When you notice your dog looking at a car tire, say your command and brandish the treat. When he looks at you instead of the tire, give him verbal praise and the treat, and keep repeating until he gets the hang of it. You can also call in a professional trainer to help with this process.

For everyone else: just be happy knowing that your car tires are a wealth of information and entertainment for dogs. That, and they're probably covered in dog pee.