See The Best Animal Photos Of 2018

Get up close to a shark feeding frenzy and meat-eating bats in these amazing pictures selected by National Geographic editors. 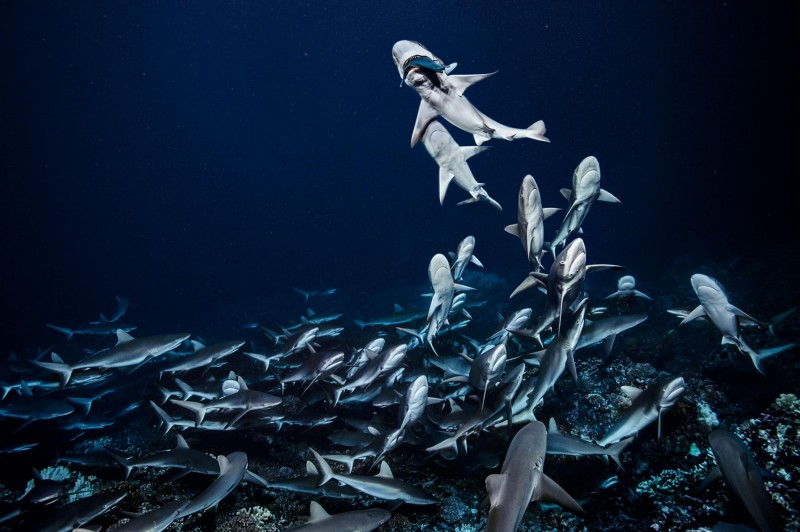 At night gray reef sharks hunt as a pack in the south channel of Fakarava Atoll, in the Tuamotu Archipelago in French Polynesia. Photographer Laurent Ballesta’s team, diving without cages or weapons, counted 700 sharks.

From "Frenzy," May 2018 Photograph by Laurent Ballest 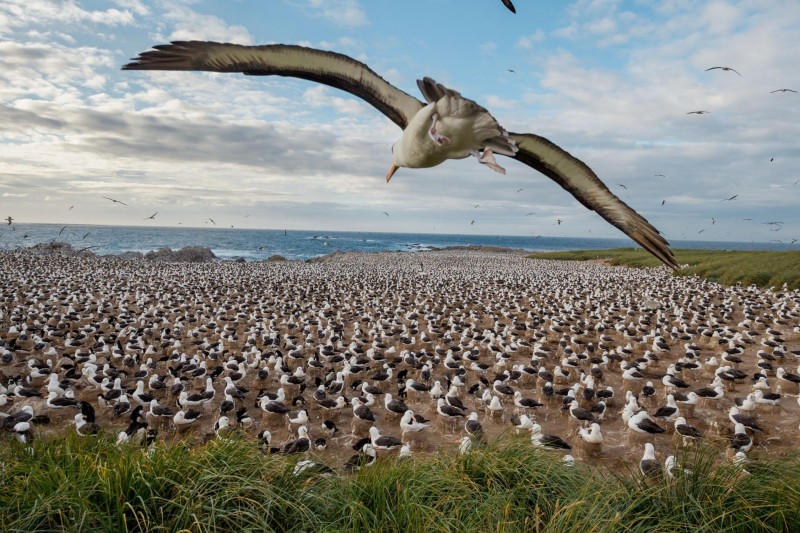 From "The Falkland Islands Preserve Wildlife and Habitat After War," February 2018 Photograph by Paul Nicklen 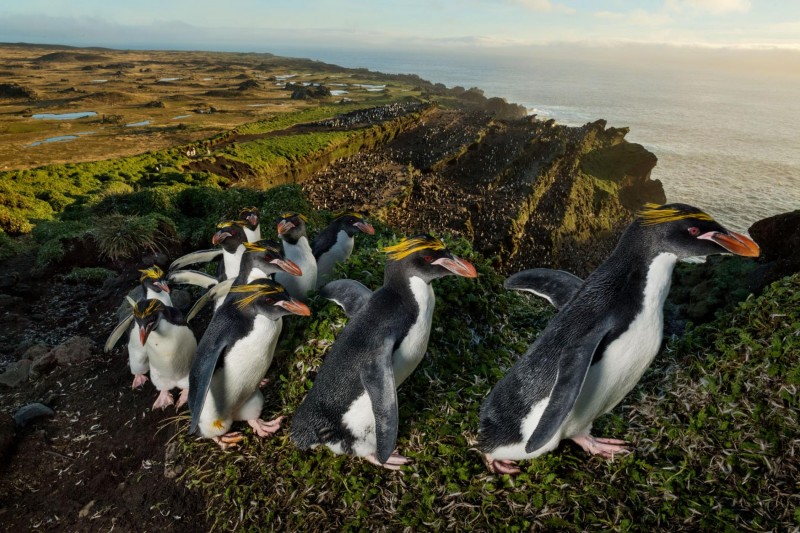 Coats fresh from molting, a column of macaroni penguins trudges up the ridge of an old volcano crater on sub-Antarctic Marion Island. Behind them is “the Amphitheatre,” a series of terraces in the crater worn down over eons by nesting and molting macaronis. “The sound of all the penguins reverberating from this multitiered half crater is really impressive,” says ecologist Otto Whitehead.

From "Lost at Sea: Why the Birds You Don’t See Are Fading Away," July 2018Photograph By Thomas Peschak 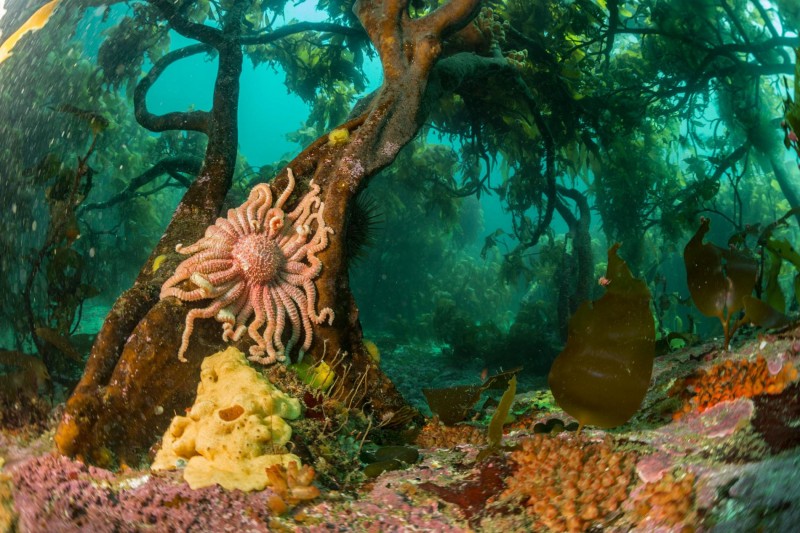 A sun star clings to tree kelp in the chilly South Atlantic off the coast of Bird Island in what looks like an underwater rain forest. The ridges that form the Falklands force nutrients up from the deep, creating a rich marine world that attracts all manner of fish, mammals, and birds.

From "The Falkland Islands Preserve Wildlife and Habitat After War," February 2018
Photograph by Paul Nicklen 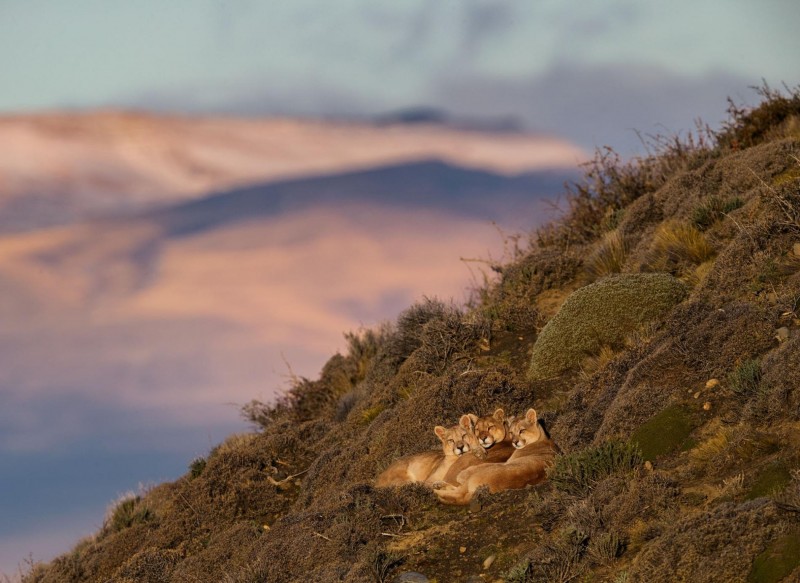 Pincushion shrubs and shards of rock don’t trouble the puma known as Sarmiento, at center, or her 11-month-old cubs, huddled up at the end of a winter’s day above Lake Sarmiento, near Chile’s Torres del Paine National Park. The matriarch, who has raised several generations of cubs, spends most of her time hunting— and napping—along this waterfront. 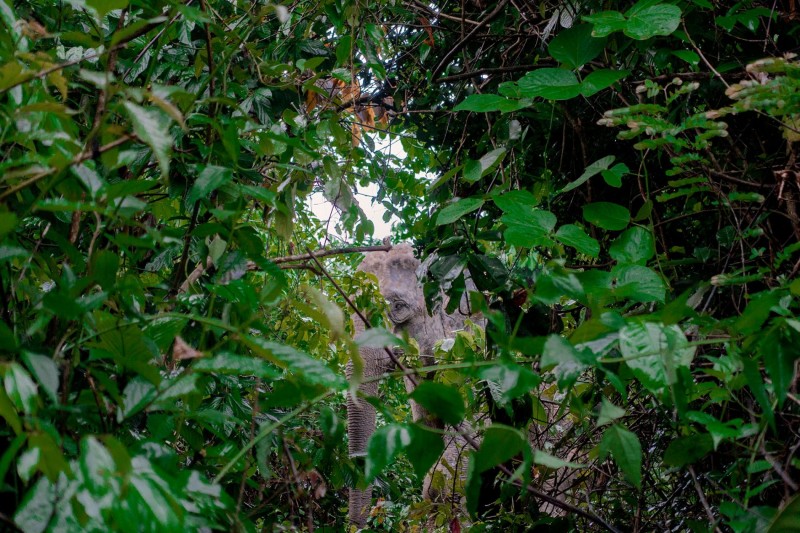 An Asian elephant peers through foliage in Bangladesh’s Inani forest, on the edge of the largest refugee camp in the world. The elephant is one of 38 trapped in the forest adjacent to the camp, which blocks elephants’ migration routes. 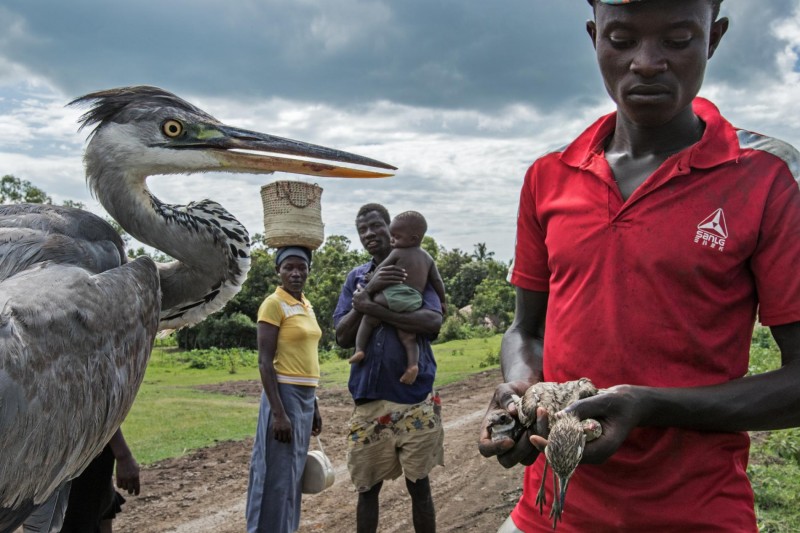 Conservationists hold a sickened gray heron and birds that died after aerial spraying of the pesticide fenthion in Kenya's Bunyala rice-growing area. Villagers collect and eat the birds, even though they’re poisoned.

From "Why Poison Is a Growing Threat to Africa’s Wildlife," August 2018 Photograph by Charlie Hamilton James 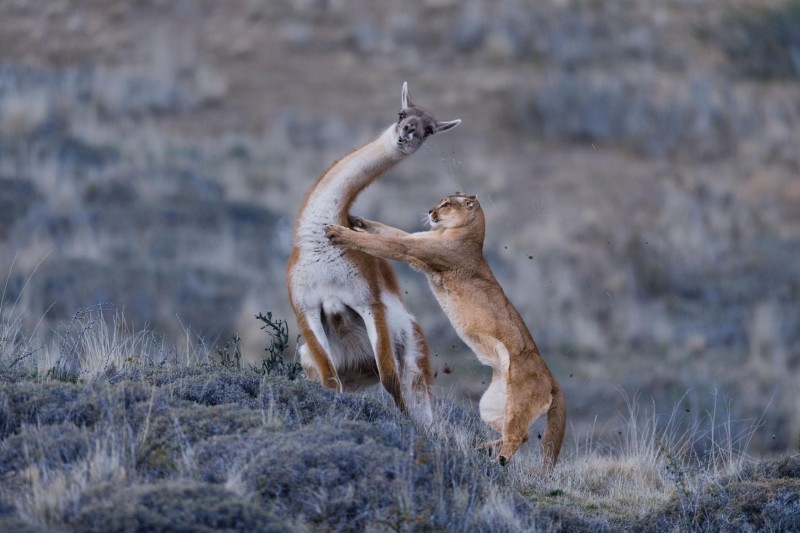 After lying in wait behind a wall of shrubs for an hour—then stalking her prey over a hundred yards of rough grassland for another half hour— puma Sarmiento leaps upon a guanaco. A strong and mature male, he moves sideways, escaping his sharpclawed foe. 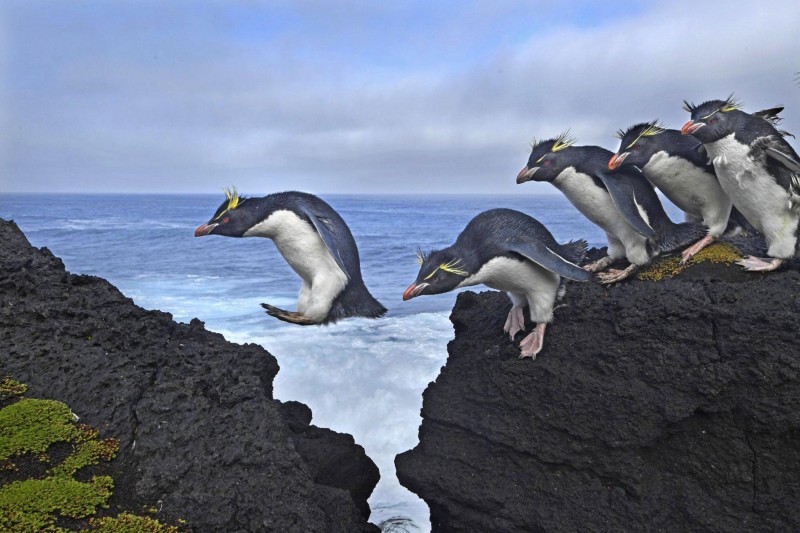 Southern rockhopper penguins must navigate the rocky cliffs and crashing waves when coming to and from Marion Island.

From "Lost at Sea: Why the Birds You Don’t See Are Fading Away," July 2018 Photograph by Thomas Peschak 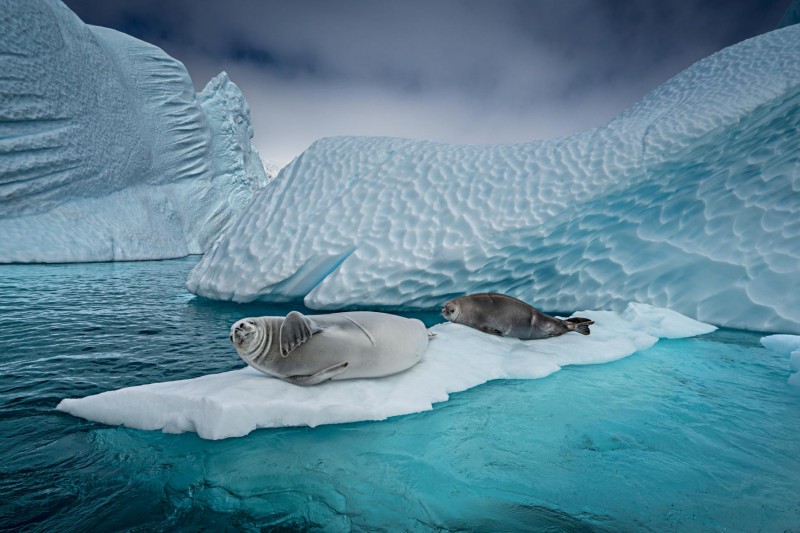 Crabeater seals slither onto floating ice to nap, give birth, or hide from killer whales or leopard seals. (Note the prominent scars.) With less sea ice available off the Antarctic Peninsula, icebergs like this one, calved from glaciers on land, provide critical resting places for animals. Despite their name, crabeaters feed mostly on shrimplike krill— another Antarctic staple whose future is in doubt.

From "The Big Meltdown," November 2018 Photograph by Cristina Mittermeier 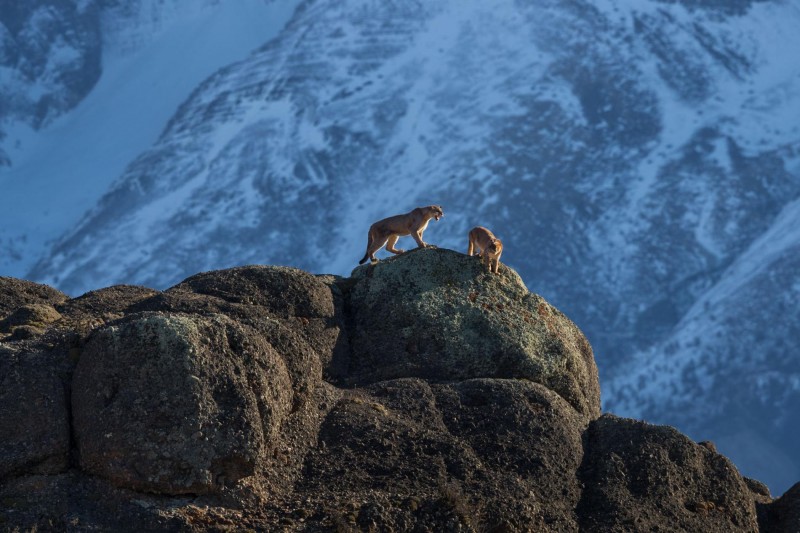 During an all-day courtship, Charqueado (at left), a four-year-old puma, pursues a female, gnashing his teeth and grunting. He mated with her five times over an hour and in a relatively exposed spot, according to photographer Ingo Arndt. Then, rather than retreating to safety, the pair strolled onto this promontory on private ranchland near Torres del Paine National Park. 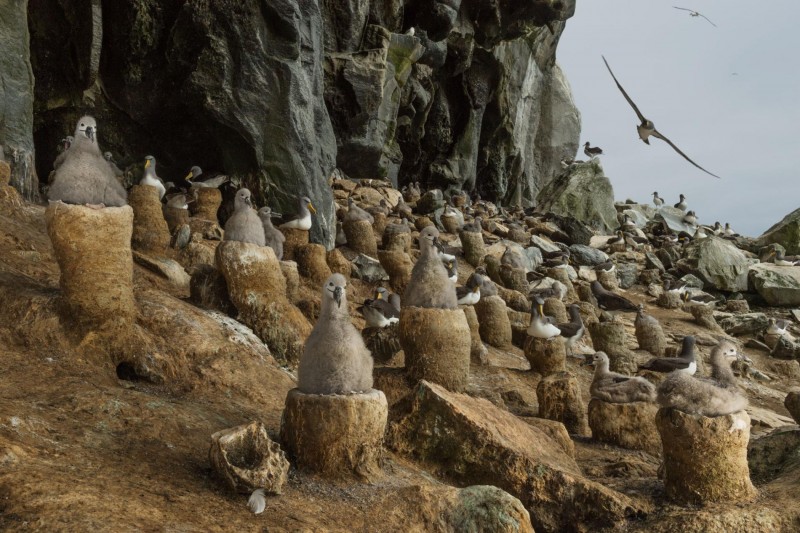 In New Zealand's Chatham Islands, the most sheltered nesting site for albatrosses is a natural cave high up on Te Tara Koi Koia. Inside, nests protected from erosion from wind and rain form pedestals tall as top hats. The downy gray chicks will fledge in five months’ time.

From "Lost at Sea: Why the Birds You Don’t See Are Fading Away," July 2018 Photograph By Thomas Peschak 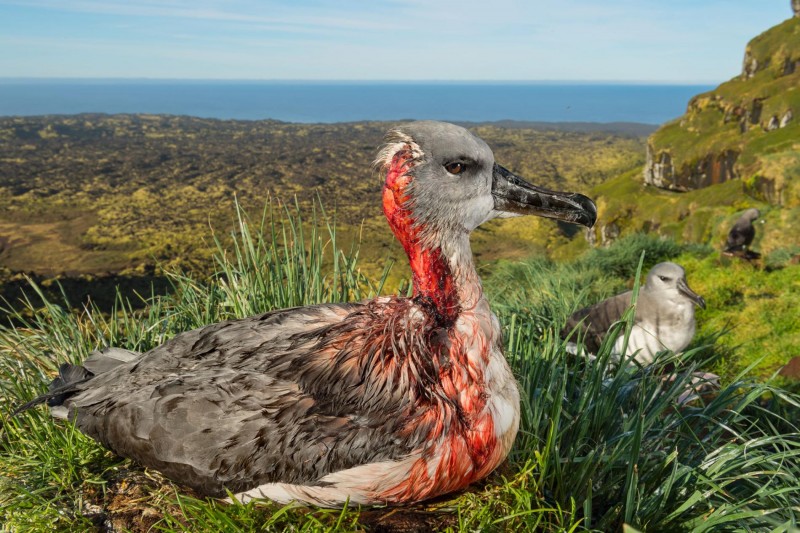 A scalped gray-headed albatross chick on sub-Antarctic Marion Island gruesomely conveys the threat seabirds face from invasive species. For reasons not entirely understood, mice brought to the island by humans 200 years ago have begun feeding on birds at night. With no instinctual fear of this new danger, a bird will sit passively while mice nibble into its flesh, until it succumbs.

From "Lost at Sea: Why the Birds You Don’t See Are Fading Away," July 2018 Photograph By Thomas Peschak 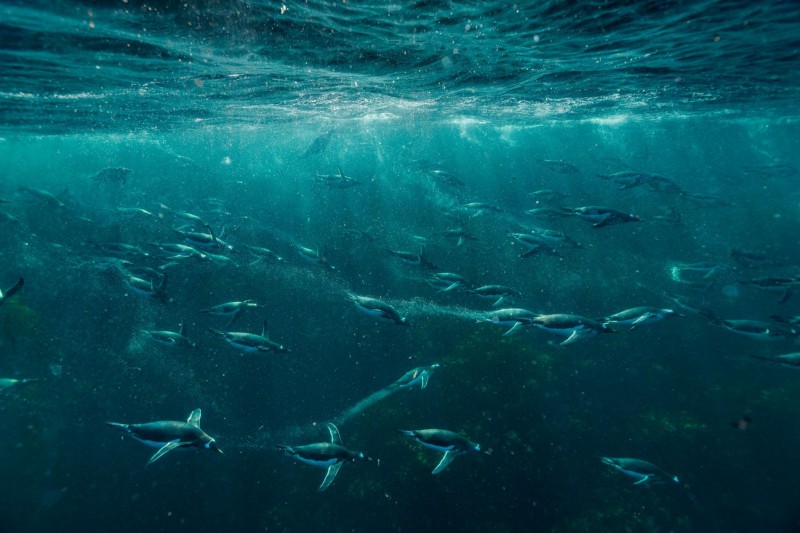 Gentoo penguins swim at the fastest speed clocked for a bird: 22 miles an hour. They’ll spend the entire day hunting in the ocean, generally close to shore, and trying not to be hunted by seals, sea lions, and orcas. The Falkland Islands shelter the most gentoo breeding pairs in the world.

From "The Falkland Islands Preserve Wildlife and Habitat After War," February 2018 Photograph by Paul Nicklen 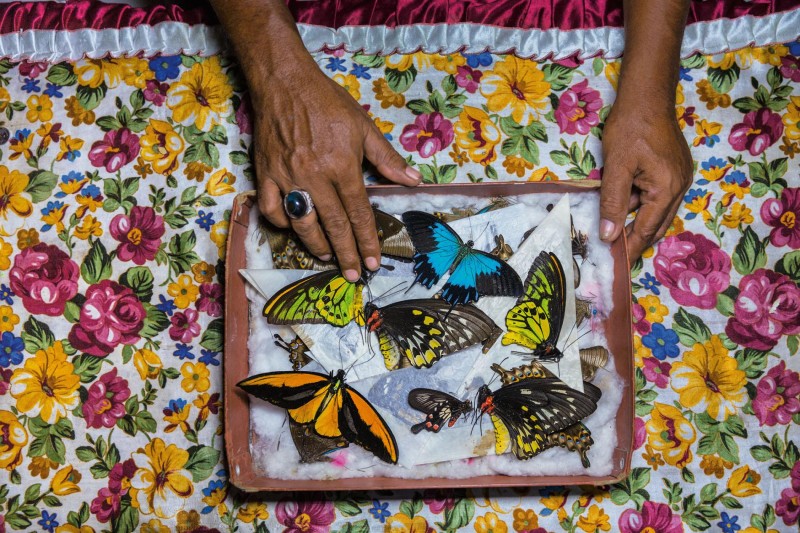 A butterfly catcher on Bacan island, Indonesia, sorts his specimens, which he’ll sell in Bali. From there the butterflies are exported throughout Asia and on to collectors worldwide.

From "Inside the Murky World of Butterfly Catchers," August 2018 Photograph By Evgenia Arbugaeva 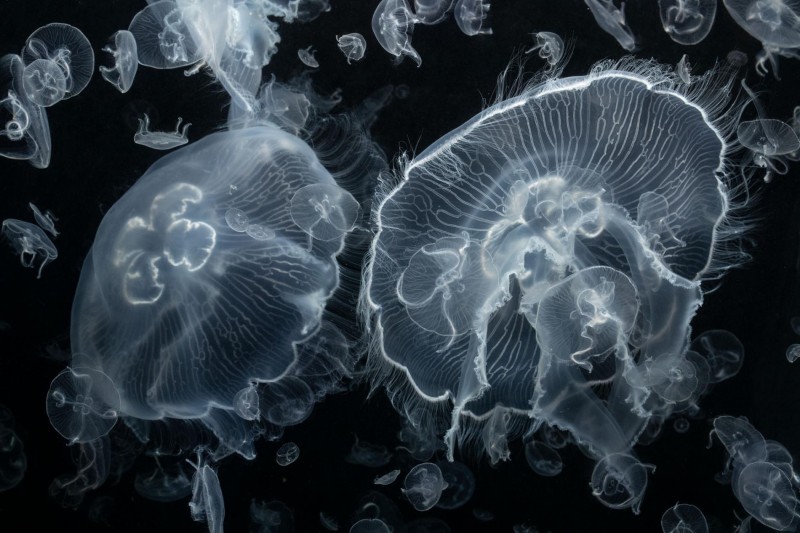 Moon jellies, found all over the world, are named for their otherworldly, translucent bells. The fringe of hairlike cilia sweeps food—mostly plankton—toward their mouths. The jellies change color depending on what they eat.

From "Scary, Squishy, Brainless, Beautiful: Inside the World of Jellyfish," October 2018